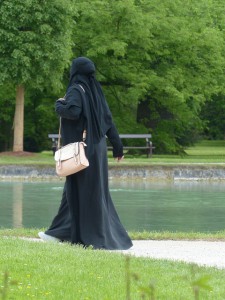 Nowadays Iran is one of the very few countries in the world that has the Sharia law as its legal basis. When I think of this country the image of fully veiled women in black gowns pops up in my mind, and I start wondering how a political and legal system is able to keep 50 % of their population prisoners, hidden under rupush and rusari. I started wondering how it is possible to live with the law of a religion, which was founded decades ago, without neglecting the needs, wishes and individuality of the people in the contemporary world. Can a system do justice to people’s changing desiderata without adapting and modernizing the laws, especially regarding women rights?

Since 1979, after the collapse of the royal regime under the Western oriented Shah, Iran is called the „Islamic Republic of Iran“ and is strictly based on the Qur’an and Islamic rights. Since then, Ayatollah Khomeini, the head of the revolution, was the Supreme Leader of Iran until he died in 1989.

Will Rohani keep up with the hopes for betterment in women rights?

Currently, the state has a double executive consisting of the Supreme leader, the cleric Khamenei, who holds the most important office, and the president Rohani. President Ro-hani replaced the highly controversial president Ahmadinejad, who was known for his strict interpretation of Islam. Many people, especially women, put their hopes in the more liberal minded Rohani. But still, the question is: Will he change something for the better?

The former president Ahmadinejad didn’t only come to a dubious fame because of his highly controversial debate about nuclear power, which he transformed into an issue of national dignity, no, his social policy, especially regarding women rights, raised many critical voices as well.

When it comes to tertiary education of women, Iran used to be the pioneer of the Middle East. 60 percent of all University students are women, but during his term in office, Ahmadinejad made a big step back in education policy and women rights: Women had been banned from certain fields of education, like engineering, education and chemistry. Even though the government cleverly left the decision to the single institution, certain motives become apparent. In the last years women had become more successful in competitive environments and had thus surpassed their fellow male students. The policy is supposed to recreate the balance between the sexes through limiting the university access of women. Another possible, very likely reason is that the government tries to stabilize its power by exploiting the education policy. It is proved that the majority of women who demonstrated against the president’s re-election and for women rights in 2009 were very educated. In general, there is a con-nection between education and political activism. This political measure shows, that Iran seems to be afraid that young educated and powerful women who are aware of their rights and frustrated about discrimination, break up the structures of decades of patriarchy in favor of the introduction of women rights.

Women have to face a series of difficulties in the labor market. Many of them have to leave their job due to low wages, violence, and unsuitable job conditions. Women normally receive less money for doing the same job and are very reluctantly hired and offered a long term contract. Since many women are forced to work in short-term positions to make the living for their family and to prevent themselves from poverty, this excludes them from many labor law protections.

But maybe there is hope for change. Since the more moderate president Rohani had been elected in 2013, you can observe positive tendencies in domestic as well as in foreign policies. Around 70 political activists who had been kept captive were freed under Rohanis rule; an agreement regarding the limitation of Iran’s nuclear program has been made; and the government shows much more willingness to compromise. Tout court, Iran and the West seem to approximate – slowly but steadily – and maybe this will not only improve the economy, but also the situation for women and women rights.

Women rights and the Shari’a

Unfortunately there is one thing the president can’t change: the constitution. Owing to the laws that are adhered in the constitution, an Iranian woman’s freedom is severely limited. Many of the rules that are based on the Shari’a conflict with women rights and are no longer culturally appropriate. They hold back progress and liberalization, especially in terms of women rights:

This unequal perception of man and woman in Qur’an is seen as the “natural result of differing but complementary biological and psychological disposition of men and women” (Ziba Mir – Hossaini, 1993, p. 36). There is only little chance for emancipation until those laws aren’t adapted to people’s needs and desiderata. Even though the government makes big steps in the right direction, the legal and religious basis does still build the basis of the value system of a country. And this basis in many ways collides with women rights.

Ziba Mir-Hossaini, Marriage on trial – A study of Islamic law, 1993